Dominque, a Program Assistant with CCD’s Client Transition and Respite program, said she doesn’t limit these moments to just Black History Month, she’s always willing to educate someone about Black culture. Oftentimes they simply don’t realize what they’re saying may be inappropriate or racist.

“For me I try not to take too much offence to it,” Dominique said. “Sometimes people don’t understand or know that what they’re saying may be wrong.”

Dominique said Black History Month has educational value for everyone, including herself. Throughout the course of the month, she said she’s learned a lot about people in the Black community.

A quick search turns up many famous Black inventors such as nurse Marie Van Brittan Brown from Queen’s, New York who, along with her husband Albert Brown, invented the home security system in 1966.

Closer to home, Black History Month also highlights the accomplishments of former politician and educator Jean Augustine who was the first Black woman to be appointed to Canada’s federal Cabinet as Secretary of State for Multiculturalism and the Status of Women. She successfully advocated for federal recognition of the month of February as Black History Month. Augustine was the MP for Etobicoke-Lakeshore from 1993 to 2005.

“To me February is a time of reflection, just thinking about how far things have come. It’s a great time to educate yourself about Black history,” Dominique said.

“I let them know, if they hear something racist said towards them or someone else, they should definitely stand up and say something about it,” Dominique said.

She said with social media dominating so many of our lives, it’s difficult to speak about racism without being rebutted or made to feel uneasy, and that’s unfortunate.

“Society-wise I’d like people to be able to have conversations about race, being more open and able to have that conversation without being uncomfortable. For me, I enjoy learning about other races, and customs and things like that. I’m very open to it. I don’t try to judge.”

Dominique has worked at CCD for 8 years. Prior to becoming a PA she worked as a PSW.

Ironically, being a PSW was not Dominque’s first career choice when she was growing up. Her interests were in business, and she did a year of Business Administration in college before realizing it wasn’t for her. Her mom’s cousin, who had finished the PSW course, told her she should give it a try, so she did. It was a decision she does not regret.

“I ended up loving it,” Dominque said. “I have been in the field ever since.”

Away from the office, Dominique describes herself as a big kid. Whatever her kids enjoy doing, and that includes tobogganing and making TikToc’s, she does too. 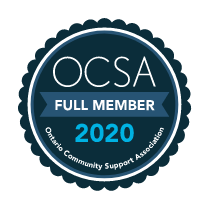